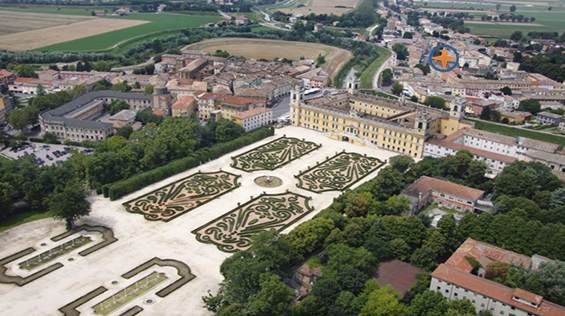 The Colorno’s palace was built in 1337 by Azzo da Correggio in order to defend the 0ltrepò. It belonged to the families of Correggio and Terzi between the sixteenth and seventeenth century was restored by Barbara Sanseverino who transformed it into a palace, and became the seat of a refined court and a prestigious collection of paintings by Tiziano, Correggio, Mantegna and Raffaello.

On 23 December 1999 by a resolution of the Provincial Government of Parma, the Palazzo Ducale is renamed in Reggia Ducale.

Since 2004, some areas of the Reggia Ducale in Colorno home the headquarters of ALMA – The International School of Italian Cuisine. Rector of the School is the Maestro Gualtiero Marchesi.

Colorno is a complex and monumental architecture, with over 400 rooms, courtyards and patios, embraced by the Parmastream, the piazza and the beautiful French garden recently restored.

The Palace, once inhabited by the Sanseverino, the Farnese, the Bourbons and Marie Louise of Austria, now housestemporary exhibitions and cultural events.

Fascinating are the apartments of the Duke and Duchess and the Great Hall, the neoclassical Chapel of San Liborio, with the paintings of famous artists and the organ Serassi, used in the annual concert season; the new apartment of the Duke Ferdinand and the Astronomical Observatory.

PATH TO VISIT with guided tour: Piano Nobile, new apartment of Duke Ferdinand of Bourbon and the Ducal Chapel of San Liborio.L’itinerario visit does not include the Historic Garden – open from 7.00 am to sunset with free entry.

MEETING: The sumptuous and elegant residence that belonged to Maria Luigia years is privileged venue for exhibitions of great prestige.

WEDDING: Its halls and its magnificent gardens are able to host in the best way all kinds of events, banquets and business dinners courtesy of the Province of Parma owns the Palace.

It ‘can get married in a civil ceremony in the “Grand Salle” , the great eighteenth-century salon, which offers breathtaking views of the French garden.